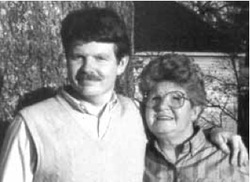 The lovable housekeeper Amelia Bedelia has been around since 1963! Her literal mishaps have delighted millions of readers young and old. Whether knitting jackets for library books, making a mad scientist even madder at the school science fair, or foiling an art theft with aluminum foil, Amelia Bedelia is sure to provide giggles, chuckles, and laughs.

First written by Peggy Parish, Amelia Bedelia became a household name and a character many teachers use to teach word play. In true Amelia Bedelia fashion, Herman Parish backed into writing these books about the literal-minded housekeeper who children laugh at and love.  Amelia Bedelia was created by his aunt, Peggy Parish.  Although she passed away in 1988, Peggy still received fan mail from children. They wondered when the next Amelia Bedelia book would be out.  When other children’s authors wrote and volunteered to continue the series, Mr. Parish felt uneasy about Amelia Bedelia leaving their family. Because he was in the fourth grade when Amelia Bedelia first appeared, he had literally grown up with her.  So Herman Parish decided to try to write a new Amelia Bedelia adventure. His two sisters and his family were very supportive and encouraged me.

Your children will be delighted with his presentations and have the opportunity to purchase their own Amelia Bedelia books.

Herman Parish will be at Gullett  on Thursday, October 24.  He will be making presentations to all classes and autographing books for children who have purchased books.
Click here to download an order form! 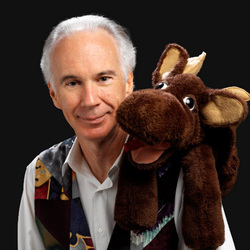 Willy Claflin was born before television. The only child of shy eccentric parents, he grew up in the woods of New Hampshire where he spent his childhood day dreaming and impersonating wild life. In boarding school, he found out he was funny. All grown up, next he went to Harvard where his imagination did not abandon him. He became a folk singer. Then he had to get a job so he taught school, where he found out kids love learning from puppets—and he got to sing.

Eventually he was hijacked by a troupe of hand puppets, including one alien life form. A full time performer and writer for the last 25 years, Willy is a now a master storyteller, mostly for adults, but his kid fans are still really important. Willy is a favorite at the National Storytelling Festival and at regional festivals across the land.

He is also the speaking mouth person for Maynard Moose, another famous storyteller and kids author. Many of his recordings are award winners. His latest work in progress is about his great- great aunt, the notorious and mesmerizing Victoria Claflin Woodhull. The first woman stock broker and the first woman to run for president (1872), she ran and lost on the Free Love Ticket.

Willy has published the first book of Maynard Moose Tales, The Uglified Ducky, illustrated by the brilliant James Stimson. A second book is Rapunzel and the Seven Dwarfs.